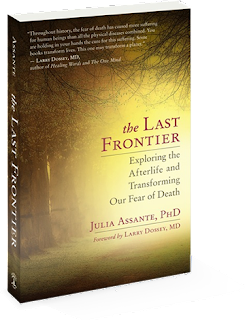 We talk with Julia Assante, Ph.D., author of The Last Frontier. Julia is an established social historian of the ancient Near East (PhD Columbia University). Yet for over three decades she has also been an active professional intuitive. In her book, The Last Frontier: Exploring the Afterlife and Transforming Our Fear of Death, she applies the insights and methodologies gained from both fields in order to present a uniquely rigorous investigation of where we go after we die. Quoted from her website(www.juliaassante.com)
"The Last Frontier explores all phases of death, dying, the afterlife and how to communicate with those who are living it. Above all it is a critical investigation of what happens when we die. That means it is not based on religious teachings or on spiritual traditions but on research drawn from several sources: from consciousness research, Near Death Experiences and Nearing Death Awareness studies; from physics, quantum biology and parapsychology; from the records of past-life therapists, medical personnel and bereavement counselors, and from the many thousands of published testimonies people have given of their personal communication with the dead. It is also based on my own experience working with the dying and the dead as a professional medium. The social historian side of me examines the various constructions of the afterlife from ancient Egypt and Mesopotamia to the present to show that cultures produced different versions of the afterlife to meet specific socio-political agendas. The afterlife religions currently teach are recent inventions in the course of humanity’s long history. So is sin, as we understand it today. In fact, the heaven-and-hell notion of the afterlife developed centuries after the Books of the New Testament were written.
One of its central questions The Last Frontier answers is why we know so shockingly little about what happens after death. Just asking people what they think happens is likely to cause discomfort, if not scorn. Others might say they don’t know and warn you not to think about it. Still others might recite the standard heaven-and-hell version, while the less orthodox will talk about joining deceased family members. Few dare to seriously reflect on life after death. Even fewer listen to what their intuitions tell them. We feel that thinking about death is macabre, unhealthy, somehow anti-life and brings the Grim Reaper one step closer. Most people keep their distance by taking the “I dunno” stance and leave it to science to figure it out.
Given that death is everyone’s final destination—our “last frontier,” you would think scientists would make every effort to discover what happens after we die. Instead, most of them will tell you nothing happens; when your body dies, it’s over. But how do they know? No scientist or skeptic to date has been able to provide a shred of proof that the end of the body spells the end of consciousness too. Even worse, they turn their backs on the enormous amount of evidence that does demonstrate postmortem survival."
Read more...
Subscribe to this RSS feed