In this episode, Brent and Seriah talk about the use of crystals in various ways, the connection to UFO experiences, the connection of lights to all this phenomena, Nessie, Hostile UFO Encounters in Brazil, Xendra, Portals and Vortexes, the Associative Universe Idea, Uri Geller and more...

Brent Raynes became fired up about the UFO subject back in 1966 after reading a copy of Flying Saucers - Serious Business by Frank Edwards. Beginning in January 1967, at age 14, Brent began collecting newspaper stories, magazine articles and books about the phenomenon. Initially his only question was - are they extraterrestrial? Before long though he became aware of intriguing alternative possibilities after reading the writings of authors like John Keel, Jacques Vallee, and Brad Steiger. By 1969 he was corresponding and swapping his newsletter Scientific Sauceritis Review with Keel for his Anomaly newsletter, Lucius Farish's newspaper clippings, Gray Barker's publication, etc. Brent eventually authored three books of his own: Visitors From Hidden Realms (2004), On The Edge of Reality (2009), and John A. Keel: The Man, The Myths, and the Ongoing Mysteries (2019). It's been a long and thought-provoking journey. Connected with many great people over the years. Heard many fascinating stories. 53 years later, Brent still doesn't possess the definitive answer to it all, but feels that it's much more complex and perplexing than he and so many others initially believed.

Outro Music is Mouth of God by Meka Nism. 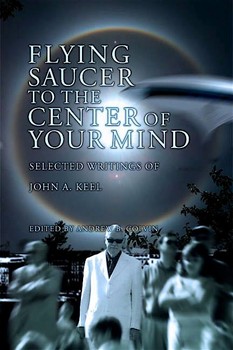 Andy Colvin is our guest as we discuss John Keel and The Mothman. Andy has published some rare writings by Keel, and has also done his own work on The Mothman.
Andy Colvin is an eclectic artist, filmmaker, writer, musician, and media commentator who has been called "his generation's Charles Fort," the "Sherlock Holmes of synchro-conspiracy," and "one of America's great, pain-in-the-butt original thinkers." Colvin was one of the founders of the "xerox" or "street art" movement now popular in galleries from London to L.A. Colvin was also one of the first "spoken word" artists, and is considered by some to be the world's foremost authority on the mysterious "Mothman" phenomenon, due to his early experiences with the phenomenon and his intensive audiovisual documentation of symbols and synchronicities.
Colvin's often controversial theories have made him a popular speaker on venues like Coast to Coast AM, Ground Zero, NPR, RAI, and PBS, and have gained him a dedicated following. In 2011, Colvin co-hosted the popular conspiracy show, "That Was the Month That Wasn't," which examined how the media blends stories to subconsciously "manufacture consent" in the public mind. Colvin currently co-hosts two wide-ranging internet radio shows, "The Stench of Truth" and "The Church of Mabus," which explore various esoteric topics.
Following in the footsteps of Fortean author John A. Keel, Colvin has blazed a 21st Century trail of investigation into mysteries that have affected mankind for centuries, such as UFOs, creature entities, magic, and the psychology of the human mind. Colvin's approach is unique in that it blends a background of genuine paranormal experience with decades of research into political science, history, media behavior, and sociology. His understanding of art and symbology has, at times, allowed Colvin to connect dots that previously escaped attention.
In the 1960s, on a West Virginia backroad, Colvin's neighborhood was hit by a series of mysterious phenomena, such as exotic flying craft, Men in Black, and the intriguing entity now known as "Mothman." Following these encounters, Colvin found that he could draw, sing, and take pictures, and that he had a photographic memory. He was recognized as a prodigy, and was eventually offered a scholarship to Harvard University. While in college, Colvin broke ground in several then-new disciplines, such as guerrilla art, performance art, and "shamanic conceptual" art. In the early 1980s, Colvin made a splash in the New York art world by taking on the persona of "Whiz," a practitioner of "collaborative art." This unique approach allowed Colvin to actually work in some manner with several notable artists.
While attending graduate school at the Univ. of Texas at Austin, Colvin helped found U.T.'s celebrated Transmedia Dept. as well as the Austin Film Society, an organization now credited with bringing commercial film making to Texas. In 1985, Colvin used his tuition grant money to purchase the only 8mm camcorder then available, becoming the first filmmaker in Austin to shoot in the new format. His ensuing documentation of the lives of local "slackers" influenced the seminal cult hit that defined Generation-X, "Slacker." Colvin's band, "Ed Hall," appeared in the film and on the soundtrack.
Following graduate school, Colvin worked on Hollywood films, toured with his experimental troupe, The Interdimensional Vortex League (once named America's "most underground band"), and began making small, ethnographic documentaries about unusual tribes, subcultures, and personalities. His 25-year study of modern Texans, "Multislackers: The Emerging Threat," is slated for production in 2013.
Colvin's work has been seen or heard in all 50 states, and in several foreign countries. His writing has appeared in various magazines, including Paranoia, The Stranger, Inside the Grassy Knoll, and D'Art, the arts journal for the Church of the Subgenius. Colvin's unique career has been studded with various mind-blowing, synchronistic events, some of which allowed him to study with, or work with, some of the greatest creative minds of the 20th Century, including Nam June Paik, Dennis Hopper, David Lynch, Robert Anton Wilson, Laurie Anderson, Daniel Johnston, Vito Acconci, Bruce Bickford, Ron English, Frank Kozik, and the Butthole Surfers.
Read more... 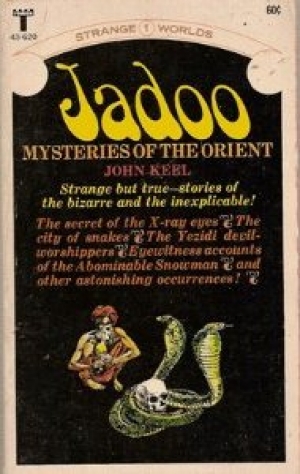 I had wanted to read John Keel's Jadoo: The Astounding Story of One Man's Search into the Mysteries of Black Magic in the Orient for a very long time. Out of print, and sometimes hard to find, I finally picked up a reasonably priced copy of it. Running roughly 250 pages, it is one hell of an interesting read. Keel is known, of course, most famously for The Mothman Prophecies, and overall as a UFOlogist. But this book is before all that. Published in 1957, this was his debut, and chronicles his life traveling around the Middle East in search of unusual stories. He delves into the secrets of snake charmers and mystics. He learned the rather interesting Indian Rope Trick. He searches for a Yeti in the mountains near Tibet. He does all this by the seat of his pants, with almost no money, and encounters plenty of problems. It's a very entertaining read, and through it all, despite his overall skepticism, he finds some truly unexplainable things out there. At the same time, you can really feel what he is describing, from the squalor of certain areas, to the majesty of others. It's a look at another culture that you don't often see from our world.

In short, if you like Keel's style, his frank, and humorous approach, you will like Jadoo, and I would highly recommend tracking down a copy.

Below is a home movie that he took of the snake charmers he talks about in the book... Kind of interesting that it exists, especially since he had to sell all his equipment to have money to live on shortly after this. Would love to see more footage from the events in the book.