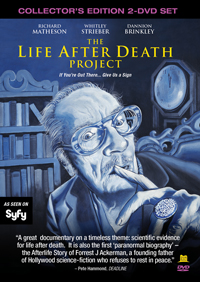 The Life After Death Project is a new documentary that was shown on Syfy in May. The just-released Collector's Edition 2-DVD Set includes a sequel film (The Life After Death Project 2 - Personal Encounters). Together, these films, from award-winning filmmaker Paul Davids, explore evidence for life after death and After Death Communication (ADC) from physical evidence, synchronicities, mediums, personal testimonies and Instrumental Transcommunication (ITC), which is the use of modern technology to communicate with spirits. In the first film, the focus is on strange, apparently paranormal events that several university scientists conclude may be communication from Forrest J Ackerman, who died December 4, 2008 at age 92. Ackerman was a Los Angeles, California-based magazine editor, science fiction writer and literary agent, a founder of science fiction fandom and possibly the world's most avid collector of genre books and movie memorabilia. He was the editor and principal writer of the American magazine Famous Monsters of Filmland, as well as an actor and producer from the 1950s into the 1980s. He was also an atheist. He did not believe in life after death, but told friends that if he was wrong, he would drop them a line.
I talked with writer, producer, director Paul Davids about these documentaries and what happened to him. Paul is an accomplished author, filmmaker, and artist, who was a close friend of Forry Ackerman and who experienced many unexplained incidents that began around the time of a large tribute in Hollywood for "Forry." He took physical evidence to science departments at three universities for research, and the results were astonishing, leading Professor and author Gary E. Schwartz to conclude this may be the best case of After Death Communication on record. This is a very interesting and original piece of work. You can find more about the documentary at www.lifeafterdeathproject.com, you can check out Paul's art at www.pauldavids-artist.com, and some more tech inspired work at www.hackharddrive.com. You can also check out some of his other movies at www.jesusinindiathemovie.com and www.beforewesaygoodbye.com.
Rate this item
(0 votes)
Tagged under
Tweet