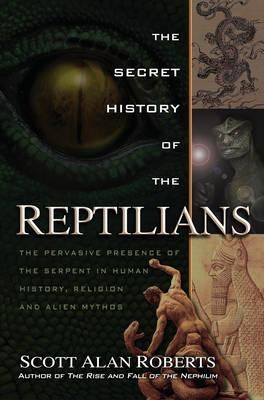 In this interview we talk with Scott Alan Roberts about his latest work, The Secret History of the Reptilians, which traces the role of the serpent in our history and the different ways that cultures have viewed reptiles. We will discuss the current Reptilian ET beliefs, and get his thoughts on David Icke. We also discuss his previous work, The Rise and Fall of the Nephilim, and his new upcoming book on the Exodus.
Scott is the founder and publisher of Intrepid Magazine (www.intrepidmag.com), a journal dedicated to politics, science, UFOs, unexplained phenomena and alternative fringe theories. He is an accomplished illustrator and writer of fiction and non-fiction occupationally hovering in the advertising ghettos of Minneapolis & Saint Paul, Minnesota. He has been interviewed on scores of radio shows, is a former political talk radio show host and was editor-in-chief of SyFy’s Ghost Hunters official publication, TAPS ParaMagazine.
Scott attended bible college and theological seminary, pursuing his Masters in Divinity (Mdiv) while working as a youth director. During his time in academia, he focused on his personal passions for history, theater and art. His religious studies were an obvious springboard for his continuing interest in spirituality, and his research of paranormal phenomena expanded throughout the subsequent years.
After his ministerial education, Scott’s career took a sharp left turn, and he went on to spend the next two-and-a-half decades as a creative ad man. He launched a small comic book publishing effort, Bent Nail Comix, writing and illustrating stories, some of which were eventually pitched for animated television. He co-created the highly successfulAncient Heroes trading card series, and began development on a line of young readers books. He authored and illustrated his first historical novel, The Rollicking Adventures of Tam O'Hare (www.tamohare.com), an anthropomorphized historical novel set in Tudor England, Ireland, and Scotland, which garnered broad attention with teen and college readers.
Scott considers himself a contemplative, spiritual man of consideration who sees intelligence, wit, justice and touch as quantifiable necessities. He values a good pipe, a stout pint, and considers himself a purist when it comes to single malt highland Scotch - which he deems not a tool of inebriation, but rather an enlightened repast to be shared with colleagues and like-minded pedagogues of philosophy and hob-knobbing banter. He does not shy away from a good fight – whether academic or existential - and has had a few classical brawls in his day. However, in keeping with what he sees as his paradoxical nature, Scott prefers employing words over weapons, wit above profanity, spirituality above religion, stalwartness above inconstancy. “As I grow older,” Roberts says, “my jaded cynicism is wholly tempered by my desire to not become an ass.” His scholarship is true, his humor is wry, his mind is fertile, and his love is deep.
Scott lives with his wife and children, just across the Minnesota border in rural Wisconsin, where he remains an avid Vikings fan; a stranger in a strange land.
Rate this item
(1 Vote)
Tagged under
Tweet