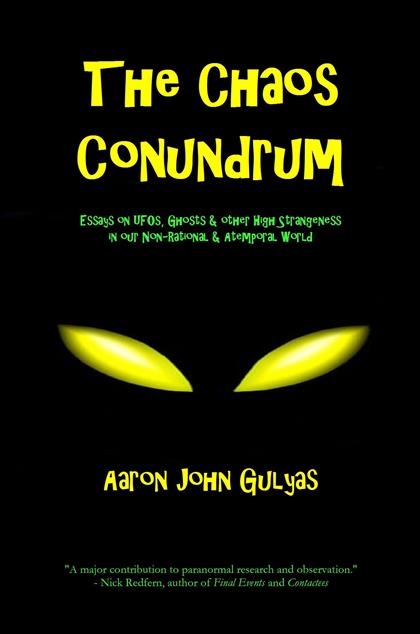 Aaron J Gulyas discusses his latest book, The Chaos Conundrum. In "The Chaos Conundrum," historian Aaron John Gulyas examines how the paranormal has intersected and influenced our culture in myriad ways, from the conspiracy beliefs of William Cooper and Exopolitics to the challenge that the stories of Gray Barker presented to our concept of self and time. He looks at the maelstrom of personalities, agendas, impressions, data, confusion, and contradictions that can be found in the world of the weird, and demonstrates how they have become an integral part of our lives, whether in the form of flying saucers, hauntings, religious revelations, psychic abilities, or dozens of other guises. Gulyas delves into the stories of the people who have attempted to create order out of the chaos. Along the way he recounts his own journey from enthusiastic believer in the "shadow government" and their underground bases to jaded academic skeptic, and then finally to someone who thinks there might just be something to the paranormal after all... but not what we have been led to expect or believe!
A teacher, historian, and writer (generally in that order), Gulyas received his BA in History from Hanover College in 1998 and promptly went to work for the state of Indiana assessing disability insurance claims. Wearing out his welcome in the civil service within a year or so, he shifted to the thrilling world of proofreading. Realizing he was only really good at history, he returned to school and was awarded an MA in United States History from Indiana University-Indianapolis in 2003. He then moved into teaching, eventually landing at Mott Community College, where he has taught since 2006.
Gulyas's first book, Extraterrestrials and the American Zeitgeist: Contact Tales since the 1950s was published in May 2013 by McFarland Books. His newest book is The Chaos Conundrum, a collection of essays on the paranormal, religion, spirituality, an the atemporal, published by Redstar Books. In Fandom's Shadow, a 50th anniversary retrospective of Doctor Who, Fandom, and its relationship to geography and time, was published in September, 2013 by Deserted Moon Press.
He contributed the introduction to Posthuman Blues: Dispatches From a World on the Cusp of Terminal Dissolution, a collection of writings by the late Mac Tonnies edited by Paul Kimball.
You can find more by Aaron at his website: www.ajgulyas.com or follow him on Facebook atwww.facebook.com/aaronjohngulyas.
Rate this item
(1 Vote)
Tagged under
Tweet