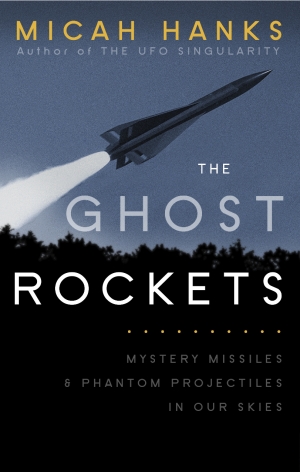 Micah has done a wonderful job of focusing on an aspect of phenomenon that no one has properly dealt with in the past. Parts have been mentioned by such notable authors as John Keel, but Keel only dealt with small aspects of the whole phenomenon. Likely, there are many causes to the cases and events that Micah outlines in this book, and he presents many possibilities.

The book starts off with what Keel focused on, the Ghost Rockets over Sweden at the end of WWII, and what they may or may not have been. These missiles were seen often, and no adequate explanation yet exists. After exploring other cases around the world, Micah moves on to the Cold War era, and some cases which may have been real missiles or rockets but covered up for political reasons. Also included are cases of anomalous rockets being seen.

After this we move on to the more modern era, and especially the missiles seen in connection with TWA Flight 800. He also explores other similar cases from the same area before and after the main event. Near the end of the book, he deals with ways that these events are recorded officially, and speculates about what some of the explanations may be. At the end of the book, he compiles a chronological list of sightings from post WWII to present.

Overall a very well written book, exploring an aspect of anomalous phenomenon that is interesting and under investigated, both in the UFO community and outside of it.