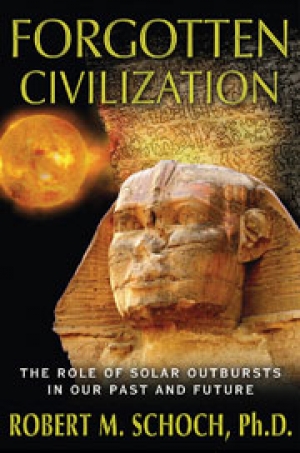 Forgotten Civilization: The Role of Solar Outbursts in Our Past and Future is the latest work by Robert Schoch. Schoch is famous for proving greater antiquity of the Sphinx back in the 90's, and although his conclusions are not accepted by mainstream archaeologists, he is supported by other geologists almost 100%. This book brings a lot of things together, for one he tells the story of his work on the Sphinx, and the backlash that his legitimate and proven conclusions caused for him. One of the arguments he heard against the greater age of the Sphinx (5000+ and probably over 10,000 years old) is that there are no advanced cultures at such an early date in our history who could have built such a structure. Well, enter Gobekli Tepe, a recently discovered site in Turkey, dated 10,000 to 12,000 years old, and the dating is undisputed by mainstream scientists. Schoch explores this very ancient site, and what it may ultimately mean. He also explores the deep mysteries of Easter Island and a possible deciphering of the Rongorongo script that has never been satisfactorily decoded.

Then he changes gears and moves out to our Sun, and the way solar outbursts may have affected our past, and how they could affect our future. He lays out the evidence for a solar outburst so powerful that it may have ended the ice age, and the culture that may have thrived at that time. He expands on what we currently know, what damage smaller outbursts have done to our modern world, and what a bigger one is capable of.

In the end, he explores the problems with modern science, and new research that may eventually overturn the dominant paradigm in many fields. He talks of the evidence of psychic abilities, the power of water, problems with current dating methods and their connections to solar cycles, and much more. It is a very enlightening read, even for someone up on the latest discoveries.

Robert writes in a very complete, and easy to read maner. I found that many times, what he was talking about would bring something to mind, and I would wonder if he is aware of it, often to find him addressing that very question in the following paragraphs. All of his sources are notated, and there is an extensive bibliography. The book itself seems to be a very interesting connection point of Robert's previous work, drawing together geology, archaeology, science, and very cutting edge ideas. Schoch's personality also comes through beautifully in his writing. It is very personal, while maintaining it's scientific integrity.

If you are interested in our distant past, and whether an advanced civilization once existed that was wiped from our memory, then this is a must read. And it is something that should interest you, because if it happened to them, it could happen to us. As safe in our modern world as we may feel, the sun could tear it all away from us in an instant, and we would be back to the caves. Perhaps literally. Knowing what happened at the end of the last ice age may better allow us to prepare for our long term survival.